One of our trips was out to Cape Point Nature Reserve. We had been warned about the baboons being aggressive about food, but sometimes it takes an object lesson to fully appreciate the warnings. On our way into the park the car ahead of us pulled over to look at some baboons that were close to the road. Our van stopped as well. I didn’t take it, but I hope to be able to share the picture one of the women in our group took of the baboon that tried to open their car door. If they had left the door unlocked within seconds it would have been in the front seat with them. 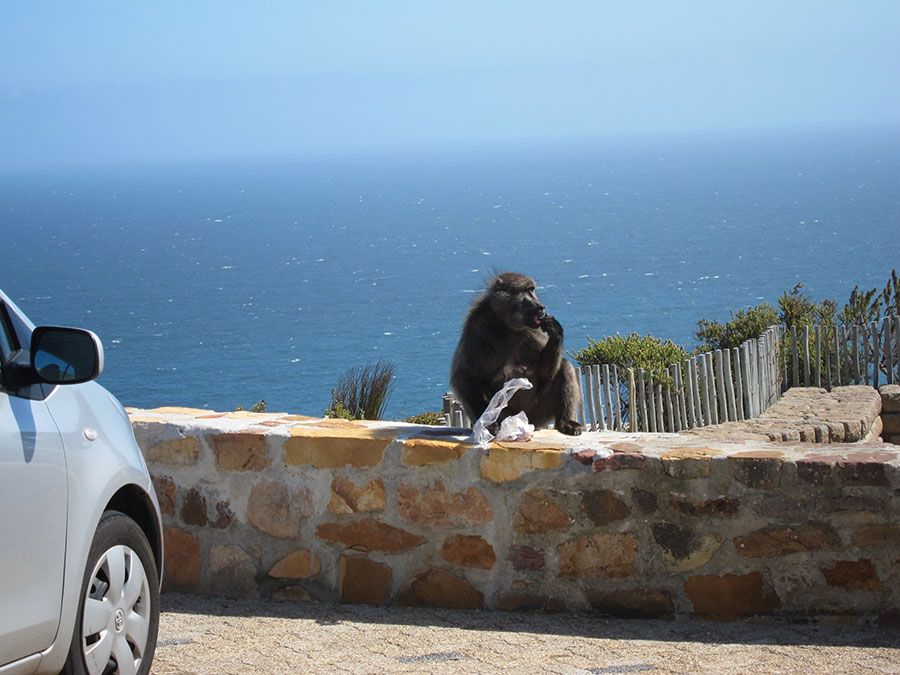 Later on, in preparation for the hike out to the point, our group had gathered in the area around the parking lot and gift shop. Some were getting snacks inside. There were a few baboons up on the roof of the gift shop, but none were near where I was standing. Thinking it was safe, I reached inside my backpack to take a quick bit of a sandwich. In the time it took me to bring the bag half out of the pack and touch the sandwich, this baboon traveled from the roof of the gift center to grab my pack and the sandwich from me, one in each hand. For a split second we both had a grip on my pack—they are very strong. Luckily, when it registered that the sandwich was what it coveted most, it released its grip on my pack. I heard later that a short time before this several of them had entered the gift shop to steal food. Here you see him with his prize of my peanut butter and jam sandwich.[album: http://www.catwingz.com/blog/wp-content/plugins/dm-albums/dm-albums.php?currdir=/wp-content/uploads/dm-albums/Cape Point Babboons/]