While preparing me for the trip to Cape Town, my sponsoring organizations did a great job of driving home the realities of the crime rate and how not to fall prey to it. In addition, more than one friend sent … Continue reading →

On my fifth day in Cape Town I took an introductory climbing class. Four of us took it, a couple, another woman and I. Moniek & I became instant climbing partners. Here we are celebrating the passing of our test … Continue reading →

The second day I was in the country Anna, Amber and I went on the Red Bus tour, a “hop on, hop off” tour designed to familiarize people 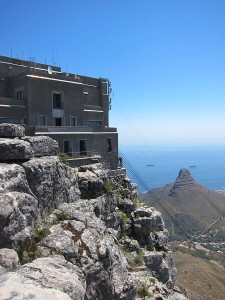 with Cape Town and what it has to offer. The red double-decker bus has a pre-recorded narrative, complete with red earbuds. It is very British and generally quite good—informative and sprinkled with occasional humor. At the time I was appreciative, but had no way of putting any of the places in context. My internal compass was off, and it was impossible to remain oriented with even basic things like which direction was north. Highlights of the tour include the ritzy beaches of Camps Bay, the Table Mountain Cableway and an impressive number of museums and historical buildings in downtown Cape Town.

At that point my luggage hadn’t caught up with me. I was lucky to have a set of borrowed clothes to wear, but essentials like sunscreen and a hat were a problem. UV protection is a much greater issue in the Southern Hemisphere. This led me to my first encounter with the generosity of Capetonians. When we reached the lower cable station on Table Mountain I hit the concessions in search of the sunscreen and a hat. I hadn’t had a chance to get local currency, but was lucky to be able to use my debit card for the sunscreen. The hat was another story. The hat I chose was in a shop run by Mavis. She was unable to deal with plastic, and astonished me by insisting that I wear the hat on the cable ride up to the upper station on top of the  mountain where the only ATM was located. She was so motherly and genuinely concerned about my lack of a hat, totally at odds with the usual capitalistic attitude. When we got to the top it turned out that the ATM was out of service. In the end, Anna and Amber pooled their funds and I was able to honor Mavis’ trust.[album: http://www.catwingz.com/blog/wp-content/plugins/dm-albums/dm-albums.php?currdir=/wp-content/uploads/dm-albums/Red Bus Tour/]

This blog is serving the dual role of:
—Travel log from when Marsha Lindsey spent 6 months living in Cape Town, South Africa working as a designer.
—Showcase for a collection of Shibori dyed silk scarves.
It wasn't intended to do this and is likely to go through some rough spots until there is time for a major redesign. Case in point, both of the gallery plugins for the Cape Town images stopped being supported so the Portrait Gallery has been removed indefinitely.
The focus for now is on giving the scarves a place to be seen and united with their new homes!