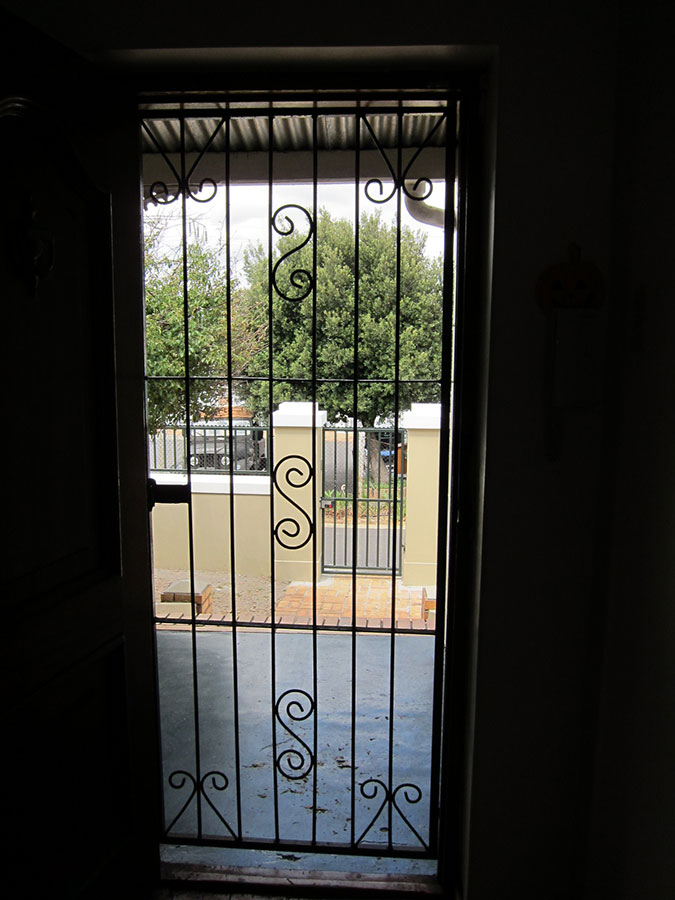 The view from within

While preparing me for the trip to Cape Town, my sponsoring organizations did a great job of driving home the realities of the crime rate and how not to fall prey to it. In addition, more than one friend sent me the results for a 2010 survey with the very sobering South African statistics for rape. All of this combined in such a way that it was initially very easy for me to overreact. A case in point example of this occurred on my third day in the country.
My house is located in the Observatory District, “Obz” for short. It is a neighborhood that has a lot in common with the Hawthorne District in SE Portland—lots of students, artists, colorful housing and a good-sized population of street people. What is does not have in common is the crime rate and the fact that it is not safe for a woman to walk unescorted at night. This is further complicated by the presence of a mental hospital with outpatient services located nearby.
Several small grocery stores are located within walking distance in the neighborhood. I was on my own for the day. Having been separated from my luggage for several days I was spending time getting sorted out and settled in. This first Saturday I chose to do a little exploring and walk to one of the stores to pick up some groceries. On the way, I encountered a man who greeted me speaking a mix of English and what I believed to be Afrikaans. I had been warned repeatedly about the risks of talking to strangers on the street and told him honestly that I spoke only English and couldn’t understand him, moving on at a brisk walk.
Later that day I was home again when our front security gate doorbell rang. I should explain first about the security measures that are a part of daily life in Cape Town outside of the townships. Every home or office has some sort of system of walls, metal security doors and locks. Razor wire and barbed wire fencing is commonplace. In Obz the street is lined with walls to the sidewalks. When I moved in I was given a key ring with a set of four keys. The first is a standard sized key that unlocks the metal gate to the compound at the sidewalk. The second goes to a small padlock that secures the metal security gate at the front door. The third is a large skeleton key for the lock to the solid wood front door. The fourth is to the door to my room. Each lock has its own personality and issues. With practice I find that I am now capable of negotiating these one-handed. I feel a certain amount of pride at being able to accomplish this feat.

Back to the doorbell—the wood door was open, leaving the two security gates and a clear view of the man I had encountered earlier on the street. My conclusion that day was that he had somehow tracked me back to the house. Separated by the distance of the length of the front walk, some 8-10 yards, we had a disjointed conversation, the jist of which was that he was asking for ice water. I had also been warned about the perils of giving anything to beggars. In the end, as an experiment I took a glass of water out to the gate, handing it to him through the bars. He told me that his name was Sanford, and then immediately complained that it wasn’t ice water and proceeded to ask for train fare. In a matter of seconds he had totally blown any chance of further cooperation from me.
Since then I have had several conversations with people about the local population of beggars/hobos/homeless—they have many names. The sad fact is that while there is a huge problem with unemployment, there is also a problem with those who have learned that they prefer to live on handouts. I was told the story of one boy, now a teenager, who has been helped in the past by the local boys home. He is apparently attractive and has learned how to manipulate young women into helping him. If he would agree to the rules at the boys home he could receive training that would permit him to get off of the streets permanently. Instead he runs away from them and would prefer to beg.
Over the weeks that have followed, Sanford has rung the bell many times, once well after dark at 10pm. Over time, he and his friends have learned that this is one of the many houses in the neighborhood with a changeable household. Certain nationalities are apparently very generous. This attracts the beggars like flies. This sounds heartless, but there are no easy answers to this problem. Give once and they will continue to ask for more. The current household has learned to take the bell off of the hook and ignore him. I also came to realize that Sanford didn’t follow me home that day. I just happened to live at a favorite address.[album: http://www.catwingz.com/blog/wp-content/plugins/dm-albums/dm-albums.php?currdir=/wp-content/uploads/dm-albums/Obz/]

One thought on “Sanford at the Door”