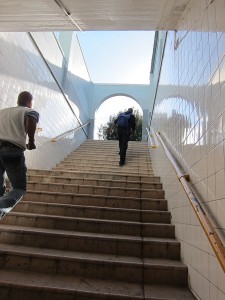 If you don’t have a car in Cape Town, one of the alternatives is the train. Before I came I had been warned about how dangerous they are to ride, and even to avoid them. The agreed upon compromise is that they are safe to ride during the day—first class, “Metro Plus” only—but never at night. Their schedules are unreliable, with vandalism, maintenance and strikes the three most commonly mentioned reasons. I have never been in one of the third class cars, but graffiti is everywhere—along the train route and inside the cars. Some of the work along the route is very well done. All of the tags inside the cars are pure scribbled vandalism.
When I began to write this post I was on the train. I looked up and was shocked to realize that the car was immaculate. I called this to the attention of my seat mates and all were equally amazed. We had all become to accustomed to tuning it out that none of us had noticed![album: http://www.catwingz.com/blog/wp-content/plugins/dm-albums/dm-albums.php?currdir=/wp-content/uploads/dm-albums/Intro to Train /]